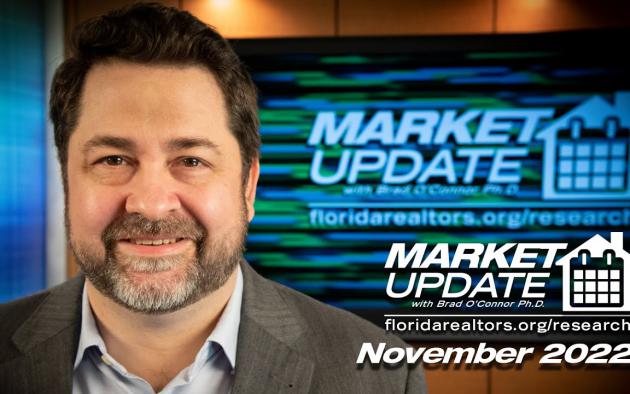 While the effects of higher mortgage rates were felt across Florida during November, a long-waited-for boost in inventory helped ease house hunters’ frustrations.

Closed sales of single-family homes statewide last month totaled 17,009, down 38.2% year-over-year, while existing condo-townhouse sales totaled 7,084, down 38.9% from November 2021, according to data from Florida Realtors Research Department in partnership with local Realtor boards/associations. Closed sales may occur from 30- to 90-plus days after sales contracts are written.

According to Florida Realtors Chief Economist Dr. Brad O’Connor, Freddie Mac’s weekly national mortgage market survey showed that the average 30-year fixed mortgage rate rose above 6% in mid-September and crested at about 7% in late October, where it remained for the next three weeks. Since then, it has fallen somewhat but remains above 6% – a rate level not seen since late 2008.

“The effect of these higher rates on homebuyer demand throughout the U.S. this fall was not a positive one,” O’Connor says. “Here in Florida, we could already see that conditions were worsening in response to the rise in rates above 6% in October’s housing market data. Based on those figures, it’s not surprising that the newly released November figures for closed sales from Florida Realtors exhibit similar declines – and we should probably expect similar declines in closed sales for December, as well, given that rates were at their recent peak near 7% for much of November, when many of the homes scheduled to close in December were going under contract.

“This is reflected in the year-over-year changes in new pending sales reported for November: a decline of 36.8% for single-family homes, and 42.1% drop for townhouses and condos.”

In the wake of the higher interest rates, the rate of price growth for Florida’s home sales continued to slow but remained above the long-term trend, O’Connor noted.

In November, the statewide median sales price for single-family existing homes was $400,000, up 9.6% from the previous year; for condo-townhouse units, it was $307,000, up 12.3% over the year-ago figure. The median is the midpoint; half the homes sold for more, half for less.

“In many local markets across the state, we’re starting to see more for-sale inventory, which gives previously frustrated buyers more opportunities,” said 2022 Florida Realtors President Christina Pappas, vice president of the Keyes Family of Companies in Miami. “Homes in Florida continue to go under contract quickly, though the time to contract continues to increase: The median time to contract for single-family existing homes last month was 29 days compared to 11 days during the same month a year ago. The median time to contract for existing condo-townhouse units was 27 days compared to 15 days in November 2021.”

To see the full statewide housing activity reports, go to the Florida Realtors Newsroom and look under Latest Releases or download the November 2022 data report PDFs under Market Data.